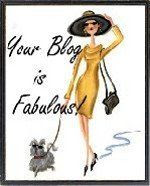 Generationsgoneby chose to give me a blog award last week. It's been such a week that I am that far behind. So Thank You for the compliment of the award, I have not forgotten.

5 things I am addicted to.
1. Genealogy is at the top. I don't have to explain that one to anyone.
2. Website creating. I discovered how much I loved this a few years back and just can't stop.
3. Caramel. Don't have to explain that either.
4. Quilting. Can't stop. Even when my fingers are numb. I always have a project going.
5. Photos. I am unable to pass one up. I have so many now and still I am always asking people if they have a photos of ___________ (fill in the blank).

Email ThisBlogThis!Share to TwitterShare to FacebookShare to Pinterest
Labels: award

Now I have something new to think and worry over. I have been concerned a long time about what to do with my work when I die. My children are not interested at all. I have a cousin that is but only in searching now and then. She is busy and doesn't seem to have any interest in the 'nuts and bolts' of research. So now I am going on a new quest. There are questions to be answered.
Sheri Fenley over at The Educated Genealogist has published a 'Genealogy Codicil' that perhaps everyone should have a look at. She has also offered a suggestion about the 'Where' question with an article called, 'What Happens To My Research When I'm Gone?'

Email ThisBlogThis!Share to TwitterShare to FacebookShare to Pinterest
Labels: genealogy, project, Will

By the poll to the left, I believe I have drawn a conclusion. Whatever program you use for your major work is the one you are passionate about. Right now, 14 people have participated. The poll shows me 13 people have found what they needed are very happy with their programs. It seems to be pretty even across the programs too. Though I have had email from people that did not participate in the poll telling me their choice. Taking all of it including my email they still stay pretty even between Legacy and RootsMagic. TMG trails behind a little adding the emails to the mix. I've played with Legacy and RM a lot lately. I've read all that RM4 is going to be. I have read everyone's comments and emails. I made my choice.

I have ordered my choice by snail-mail (I don't like to put a card out there and they offer the opportunity to use mail, thank you!) and now wait. I put it in the box first thing Thursday morning. The last time I bought a program was late in 2005. So I am really excited about getting it. When I have gotten all those little files changed to gedcoms from .FTW files, I will delete FTM with great joy!

Email ThisBlogThis!Share to TwitterShare to FacebookShare to Pinterest
Labels: programs

The question is, which one? RootsMagic or Legacy. I have narrowed it down to those two. I have a trial of RM on my computer, and I have been working with Legacy 7 for a while. I'm thinking it is a little harder than it needs to be. But it does offer choices of everything. Do I need to make that many choices? RM seems friendly and appealing. It doesn't make me tense to play with it.
What ever choice I make is the one I will be sticking with. So it has to be good. This is the year. I want to have my choice made and my order in by the last of the month.
NO MORE FTM. I don't know what direction they are going, but it is definitely not my way. So far on Facebook I have had 3 for RM and 2 for Legacy. One voted for The Master Genealogist. I don't know anything about that one. 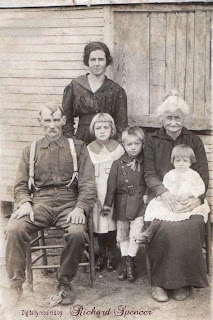 This photo is of my Brock/Raborn/Raburn/Rayburn family. The young boy standing is my great-grandfather, Patrick "Pat" Henry Brock. The young woman standing is supposed to be his mother, Irene Matilda (Raborn/Raburn/Rayburn) Brock. Myself and other family members believe that it is true. The girl sitting on the elderly woman’s lap most likely is Patrick’s sister, Sarah, and the one standing, his sister Nellie. The man sitting and the elderly woman are the ones I need to put a name to. It is possible that the man is Patrick’s father, Francis Marion Brock. The older woman could be a grandmother perhaps. That would make her Irena [Ammons] Brock or Rebecca [Rue] Raborn/Raburn/Rayburn. Patrick was born in 1884, which would date the photo to around 1890 to 1895 perhaps. I have this photo on my site under 'Mystery Photos'. I would love to know if that is Francis "Frank" Marion Brock. If there are any cousins out there, I would love hearing from you!

The photo originally had 2 corners missing. It was digitally repaired by Richard Spencer.

My first search of the year is a new line for me. Catherine E. Draper married George David Bohall. They are my 4th great grandparents.
George was born April 17, 1819 in Meade County, KY. He died December 7, 1897 in Tampico, Jackson County, Indiana. Catherine E. Draper was born April 20, 1822, I believe in Indiana, and died June 19, 1897 in Tampico, Jackson County, Indiana. They are both buried in Mt. Pleasant Cemetery in Grassy Fork Township in Jackson County. I have so far only found 4 children; Joseph, Elizabeth Ellen (my direct ancestor), John Dudley and James Seth. It is my belief that Catherine's E. stands for Ellen. It made it to my great-grandmother, Olive Ellen Martin.
George Bohall is of the basket-making Bohalls. Quite famous for their basket making abilities. Many of the families were in Brown County Indiana which is right next door to Jackson. I finally found George's obit just recently. It was an accident, quite frankly. I was in the library looking for something else and there he was. I had not been able to find it before so it was a very exciting moment! Here it is:

Wednesday, December 8, 1897.
George Bohall
George Bohall died Tuesday, December 7 at the home of John Shutters on Lynn Street with heart failure and infirmity. He was born in Kentucky opposite Leavenworth, April 17, 1810 and located near Tampico in this county 60 years ago. Two sons, John D. and James S. survive. Interrment in Mt. Pleasant Cemetery east of Tampico.

So that brings up another question. Who is John Shutters and why did George die there? It is also strange that Catherine died in June, Elizabeth died in July and George died in December of 1897. I bet I find an outbreak of something during that time period. It seems strange that all that death is not connected.

BTW: I still can't remember what I was looking for when I found George's obit. Now I have to go look for Catherine and Elizabeth in the same book.
at January 05, 2009 1 comment:

Wow. I moved to this apartment in 2004. It was a terrible time when I did. My daughter had 4 surgeries the first year we lived here. I started having big allergy problems, an eye infection and bronchitis for the first time in my life. Needless to say I would move out in a breath if I could. I simply stuck some things away and forgot. Really forgot. Everything started to calm down a little and my Dad died unexpectedly in 06. Not that most people expect death, he just sat down and never got up. No warning.
Wednesday night I decided to go through a box I had stuck in the back of the closet. I was looking for something and ran onto the box and remembered putting it there, just not what was in it. So I had a look-see. All the things on top were breakables/collectibles I had forgotten about. There were clay items made in school by my eldest daughter, namely an owl and a sugar bowl and creamer. Most were just little nick-knacks that I could live without seeing again. But, and this is the big one, there was another quilt that was made by my paternal grandmother. This one was blue and yellow. That is a favorite color combo of mine! It is not in the greatest of shape and the colors have faded. But all her quilts were used well and loved that is why she made them. I want all the quilts I make to be well used and loved too. It was quilted, not tied. It is a hand pieced whirligig pattern, the name of which escapes me at the moment. It is a small quilt, so most likely made for one of the kids beds, probably one of the girls (my aunts) I vaguely remember my dad bringing it to me when we were getting ready to move. Everything that happened after that is just a blur. I didn't even remember it at all until I pulled it out of the box.
So, I must get photos and do a careful inspection of my old/new treasure.
at January 02, 2009 1 comment:

To Each of You: Happy New Year!

So it is finally here! A new beginning for us all. I always set goals for my new year, but most are personal ones. I like to think of them as goals or of late, promises to myself. Resolutions are so easy to break and joke about later. My goals or promises are things I need to give attention to. Things I give myself because I know I need them. So, I won't discuss them. I will give attention to them throughout the year and at years end, I hope I will have reached the goals I set for myself.
Many of you are old friends, but most of you are new friends found just in this past year. What a wonderful year it has been! And to find such great people. What a network you have helped me to build. Giving thanks for the old year as it wans, I will give thanks for all of you. I thank you all for coming into my life.

So, for all of you I hope:
That your new year is bright.
Good health, happiness and joy come your way.
Brick walls tumble.
Your ancestors are found.
You grow in personal ways you never thought possible.
You love and laugh.
And we all meet here same time next year to start all over again.