I'm proud to say I am now a member of The Association of Graveyard Rabbits. The new blog is The GraveYard Rabbit of Jackson County, Indiana.

BOO!
Have a delightfully ghoulish Halloween

Email ThisBlogThis!Share to TwitterShare to FacebookShare to Pinterest
Labels: GraveyardRabbit

Was It Fact or Fiction?

Well, it was evenly split, 3 fact and 3 fiction. That's not leaning one way or the other. So, I guess it's time to tell you the truth. 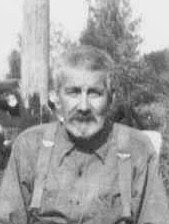 This is George Thomas Jaynes, better known as 'Old Tom'. He was my maternal great-grandfather. Writing the story was not hard to do. It flowed. Funny, I could hear my grandmother's voice as I wrote. You see, the story is true. I interviewed many in the early days. They all told pretty much the same story, only their own eye-witness accounts were a little different. Everything I wrote was fact. There was more that I did not write because I knew that you would not believe it all.

My curiosity about this man has not waned at all. I am stuck on his grandfather, David Jaynes of Metcalf County, KY. So I know little more about his background than I did when I began.

I was tagged by Taylorstales-Genealogy. So here goes.

Ten Years Ago, I Was:
1. Babysitting my first grand-daughter a lot!
2. Recovering.
3. Worked with my Dad for a while.
4. Sewing, sewing, sewing.
5. Caring for my daughter.


I've not gone far from here for sure!

Tomorrow I will reveal whether Old Tom was fact or fiction!
at October 20, 2008 No comments:

The Eyes of Old Tom.

When I first started researching my family, I was really looking for an answer to an old question. It was just curiosity. I only wanted to know where he was from and why. Why was everyone afraid of him? And why did they call him 'Old Tom' long before he was old? My own mother said she never looked into his eyes. "They were strange eyes" she often said. "A funny milky blue that looked through you."
Now my grandma lived with Old Tom and his wife Cora when she and grandpa first married. Grandma loved Cora. She said she was the warmest woman she'd ever met. She also laughed about Cora's famous temper. Seems she never had a full set of china because it became her weapon of choice when she was mad.
But it wasn't Cora I wanted to know about. It was Old Tom. When they spoke about him, they spoke in whispers, as though he might be listening. Perhaps he was. He died the month after I was born, so I never knew him, though Mother said he did hold me once. I have to admit that I had never heard them whispering about him until I was a teenager. It wasn't a thing to speak of in front of children.
Seems Old Tom was called a witch, mostly because they didn't know what else to call him. He always seemed to know what was coming. But there were other things too. The rapping. Not music, you understand. Knocking on the walls, from some other world unseen to us. But the thing that scared people most was the power he seemed to have over objects. He would lay a hand on a table and it would 'walk'. Kept the neighbors scared, I hear. He often did these things when people he didn't care for came to visit. He didn't have many of those kinds of visitors, I can tell you. People were scared of Old Tom. They thought him a witch or a devil.
One clear, beautiful day he was making a table walk when suddenly the window was blown apart by a bolt of hot, white light and the table was struck and burned. Old Tom was scared that time. Scared enough to rethink some things. Misuse of power? Waste of talent? I only know what my grandma told me about that. Old Tom thought he had wasted his power. He said he was wrong to scare folks. He understood some things better, but he'd not tell her about them. She was better not to know. He never again tried to scare people. He never again walked a table.
But, right up to his death he talked about how he wished the spirits would leave him be. The rapping never went away. The spirits were always trying to get his attention. My grandma felt sorry for him. Many people I talked to thought he was evil. I just wish I could have met him. I want to find all of his family. Where did he get his abilities? Was it a family trait?
Funny though. My curiosity about him led me to this place today. My habit, genealogy. I'd have never started my research had it not been for him.

Is it Fact or Fiction? 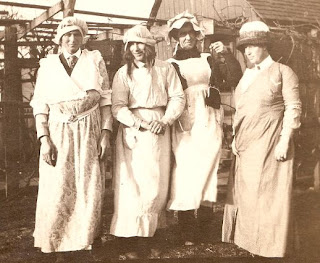 . . . . or is it? Could it be 4 really homely women :^) Sorry. This is another 'orphan' photo. As I thumbed through the stack I thought hats, I must check them out more carefully. When I went back, boy was I surprised! I didn't catch it first time around. The middle two are a little more creative than the other 2. A wig and a purse! I will never identify them. Wish I could. What would a researcher say, I wonder, if I said I have a photo of your grandpa?
Actually I could just have easily posted a drag photo of my own. I have one of my grandfather and his friend hamming it up like this too. It must have been all the rage in the early decades of the 20th century.
What appropriate timing.

Submission to:
6th EDITION
Smile For The Camera

Email ThisBlogThis!Share to TwitterShare to FacebookShare to Pinterest
Labels: Smile 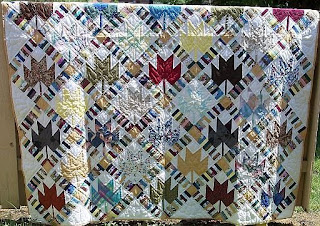 My dad wanted me to make him a quilt. We poured over books and patterns, discussed color schemes and fabrics. He finally chose the "Maple Leaf" pattern which I put on point. He wanted a scrappy quilt in more blues and fall-like colors. He loved the quilt when it was finished. I gave it to him in 2000. I took the photo above a couple months ago. My step-mother returned it to me when he passed away in 2006.
at October 04, 2008 6 comments: