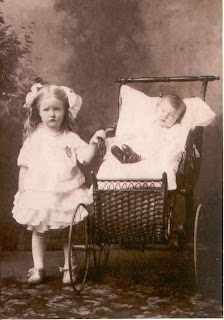 This is my first foray into the Carnivals. I haven't really been at the social thing for very long. But when I read this one, I decided I could do it. Right. Once I started looking I discovered something. How can I pick a favorite photo? I have a million favorite photos. All of them are favorites! So, as usual, I made it harder to do than it needed to be. I did finally make a choice. Pretty easy choice, in the end.
This is my favorite photo of my favorite grandmother, Della Mae [Alexander] Jaynes. That is her little brother, Merrill Harris Alexander, sleeping peacefully in the carriage. I love her little sad face. Her dress and hair are just perfect. I'd love to have the buggy!
But, doesn't she look so sad? I told her how sad she looked and she told me why. She said, "Oh my, I was sad. I had tore a hole in my stockings putting them on and when I got home I knew Mother would see it and I was going to be in trouble." She also talked about how long they had to stand and so very still they had to be.
The photo was taken about 1909.
[Yes, she said she got [her word] 'walloped' when they got home.]

I have been searching for a first name for a long time. Somehow it was lost. Not by me. By the time I can along it had been lost. My great-grandmother, Cora Hines [Abbott/Jaynes] was twice married, first time ended in divorce. The first marriage is the one I have been trying to find. She was born March 8, 1870 in Neoga, Cumberland County, Illinois, and died December 21, 1948 in Jackson County, Indiana. She was first married to an Abbott man. So far as I can see they only had two children. Katy Abbott Forrest [Edna Catherine - born May 9, 1892 died in 1934 of TB - married to George "Frank" Forrest] and Percy Abbott. I have not found Percy. My gr-aunt said both Katy and Percy were buried in Washington County, Indiana, but I found Katy beside her husband in Seymour, Jackson County, Indiana. Katy had a son. I don't know anymore than that. I always hoped I would run into the family of her son online.
There is a story about Percy. My grandmother told me Cora had told to her early in her marriage to my grandfather. It was that Percy was always a very delicate child, often sick. But one day he simply laid down in the floor and died. My grandmother said he was around 12 years old. I have not found a whisper of him in records.
Cora married George Thomas [Tom] Jaynes Sept 11, 1896. Percy was supposed to be alive then. What I have been looking for is the Abbott mans first name. I cannot find a record of marriage or divorce. The marriage could have taken place in any of 3 states, Indiana, Ohio or Illinois. There was a lot of family still in Ohio, Cora was born in Illinois, there were a lot of trips to Ohio and they lived in Switzerland County, Indiana for a time. I believe she was living there when she and my gr-grandfather met. They were living in Seymour, Indiana at the time of her death. They were an interesting couple. He was the reason I started out researching my family history. But that is another story. A spooky one......................... :>o
at July 30, 2008 1 comment:

When I was growing up I had a best friend. As it happens many times 'best friends' sometimes grow apart and lose contact over the years. I had a best friend many years ago that I lost contact with. I saw her again a few couple of years ago when my father died. Shortly after, her son was diagnosed with cancer. He was only a year older than my youngest daughter. I kept up with his mighty fight to beat it. I thought often of her helpless agony.
My brother came by and told me that Josh had lost the battle yesterday. It is a tragic thing that simply can't summed up in a few words. My heart and prayers are with his mother, Beth, and his young family.
at July 22, 2008 3 comments:

Email ThisBlogThis!Share to TwitterShare to FacebookShare to Pinterest
Labels: friend

Pat or Not Pat? That is the Question... 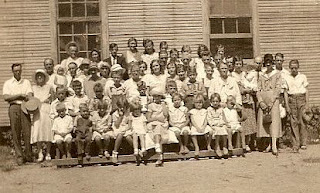 We have a mystery. . . . again. My cousin found a reunion photo with a mark on the back saying San Antonio, Texas.

It was among Brock/Beard and associated family photos so we inspected it carefully. I found what I thought to be Pat (Patrick Henry) Brock. 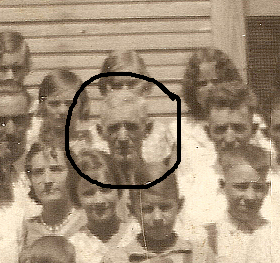 My uncle states he thinks it was of Morgans and Pat is not in the photo . In particular, he believes it is the family of Callie Miranda Morgan. She was my gr-grandmother Jessie Morgan's younger sister, daughter of Reese [Simpson] Morgan and Matilda Marie White in Monroe County, Tennessee. Callie married Edward Lee Morgan, I know nothing else about him. She died in Tarrant County, Texas on October 15, 1965. I have been unable to find his death date.

San Antonio[Bexar] is some distance from Tarrant. I had heard that some of our Brock family went to Texas, so assumed this had to be them. They certainly have the Brock ears and nose! :o)
at July 10, 2008 3 comments:

Well, I'm still at it. I thought it would be an easy job. Just take the pictures and add the known data, maybe a story I knew about the item and Bam! I'm done. Ok. So nothing ever goes like that. I have taken photo after photo. I am still not really happy with the photos.

The quilts are just too big to photograph inside. So I took them out and hung them over the fence. I just don't have the right light at the right angle to get good color. It's always something. I am going to settle for the best photos and try later when I can take photos elsewhere perhaps. I have all that were made by someone else done. Now, the photos are done and I have them organized in the way I am going to add them to the site. The next part I like. I like to make pages. It's all down hill from here. (I hope!) I'm a little superstitious.

I've been thinking. I should put up the contemporary work of family members too. We are a crafty bunch! I think every family is. Most just don't think it very important or that anyone would be interested. I think that the work you do just because you love it, tells more about you. What I want my descendants to see when they find my work is who I (and my family) was and what I (and my family) loved. It will tell them more about me and my family than if I left an "About Us" book behind. A book can be edited, dressed up. Your work is you. It does not lie. I have no family members interested in taking my work on, no one of this generation. I have to think about getting it out there where it can be found in the future. I do have hope that someone, someday will look for us. 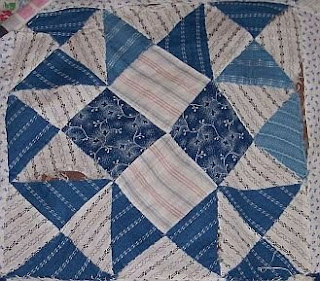 Above is a block that I have been unable to put a name to. I am certain that it has a name and I know it, but it seems to be hiding in an old brain. I do know that it is a variation on the "Dutchman's Puzzle". With a windmill pattern in the center block area I would know it as "Merry May". But with the 4 patch center I don't remember. It is a block on a quilt made by my paternal grandmother. I believe it to be ca. 1930 - 1940. Below is a sketch of the pattern. 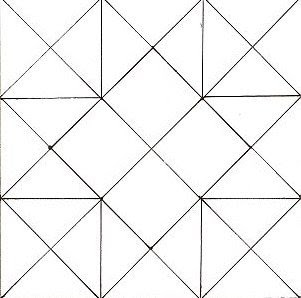 I am photographing and gathering all the information I can about family artifacts for a 'museum' section on FamilyTwigs. I have started with the quilts. I have worn myself out measuring them and photographing everything on them. Checking the fabrics and trying to assess the damage to the older ones and approximate age of the quilt. When I am gone I do not know what will happen to them. I want to get all I know about them and my own assessment of them now. As you can see this one is coming apart in places. I believe it can be repaired but is it worth it? I don't know if I will repair or how yet, but the internet is good at teaching these kinds of things. For the most part this one is in pretty good condition for its age and the fact that it was created to keep people warm, not for show.
If you recognize the pattern email or 'comment'. I'd love to know!
at July 03, 2008 No comments: