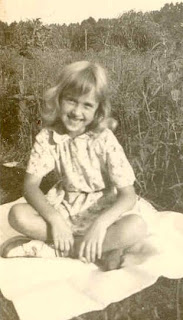 Today is my mothers' birthday.

Email ThisBlogThis!Share to TwitterShare to FacebookShare to Pinterest
Labels: birthday

Some habits are really hard to break. How you work, for instance. I did not have access to a computer for my early research days, and I still work first on paper. So I've decided I'm 'going green'! Try to break the habit of so much paper. It is a much longer process for me to get to the computer stage. Slows down the process. Going completely digital will cut out a step and allow all the files to be kept in one place. I've tried before and slid back into the old habits. But now is different. I'm eco-conscious, I'm saving trees. Never mind the fact that I am out of space and tired of paper and organizing and searching. . . . . So, I am going to really do it this time. I've been digitizing my photographs and documents for as long as I have had access to a scanner. I thought of it as a safety issue, having it on the computer/disk would make it hard to lose anything. Now I have to think of it as my main library/file and organize to reflect that.

What about tools? What is really necessary? I have a scanner/copier/printer. Ok, so I'm not going to mention the copier/printer part. I have OpenOffice. Now on the family tree program, I am working to break my FTM habit. The last few times I upgraded were not happy experiences. I gave up with the 2005 version. I am going to Legacy. I have the new free Legacy 7 already on my computer. Right now Legacy 6 is working for me. (I will buy 7 later.) FTM was my first and that is what you tend to stick with. I've heard nothing but bad about the newer version and have had so much trouble with upgrades over the years that I have finally quit. I have all my photos/documents already filed on my computer. Is that all that's needed? Well I need what my grandmother called 'gumption'. I believe that meant the 'want to', and I want to!

I've made a lot of changes lately. To be more social is what drove the creation of my blogs. Learning the new social tools for connections. Joining in more instead of passing up the opportunity to speak and meet new people. I do have foot-in-mouth disease so I try to give it thought before I speak [AKA: mouth working before the brain is in gear] :o) Research has become more interesting on more than one level. I am always collecting tips for myself and
my users at the county site. I am a blog-a-holic, and I make my 'blog rounds' first thing in the day to get my fix.

Donald "Don" Eugene Jaynes was born September 17, 1921 in Jackson County, Indiana. He was the only son of Della and Jim Jaynes, had a dog named drum and was generally a normal, full of life boy. He had 3 sisters. 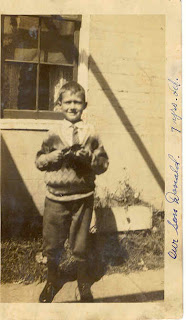 He was so happy in February of 1938 to get his Beginners License to drive. 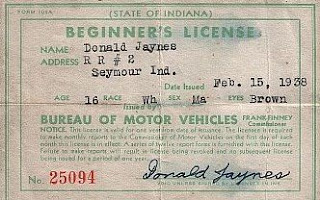 He became ill in May and died June 17, 1938 of Leukemia. They didn't tell my grandmother that he was dying. They did not think she would be able to go on and they were probably right. She had to care for him, and she thought he was going to get better. She often talked about the horrible grief that stayed on her for so long. At this time of year she always became sad and talked about him and his friends. His life had only begun. 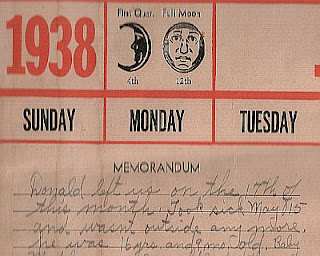 She had kept the calendar. This was written at the top of June. Up until this page she had written all kinds of things each day. There were no entries after June by her.
at June 18, 2008 1 comment: 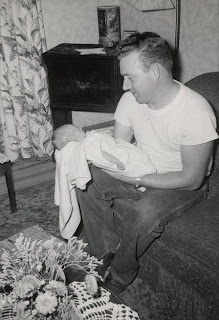 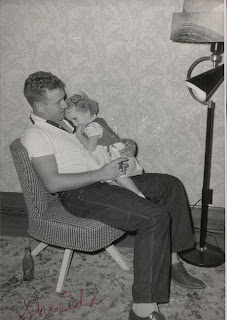 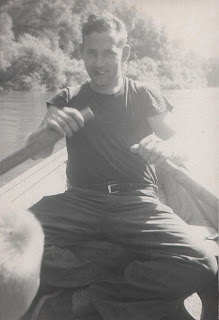 My father died 2 years ago tomorrow. I hate it when Father's Day rolls around. There simply is no way to feel good about it. This is just not a good week for me. I had thought I would do a bio on him but find I am incapable of doing so right now. I will just speak with pictures.
at June 13, 2008 1 comment:

It appears that the clean-up is in progress. I don't think we got enough rain last night to make things really bad, though I am sure even a drop was not welcome. This morning on Tribtown the 'Breaking News' was about a fire in Crothersville. Nothing about the flooding. I feel sorry for those that have lost so much. I have cousins that had to be evacuated and I still haven't heard about how they have fared. I hope it did not get into their homes.
Today I have several tasks on my to do list for genealogy. I have scanning to do. I also have several things to take care of for the county site and I don't have to go out at all. (I hope) My plan is to get EVERYTHING online. Timeline on that? Before I die :o) As the flood had shown, you can lose everything in a blink of the eye. I need my work to outlive me. My children are not interested in genealogy. I have been trying to find a personal site that has done this. I want to see how. There is WeRelate but I just haven't made up my mind about that yet. It's not an easy site to work with and it has other problems still. The new FamilySearch is the place I am waiting to see. I hope it is going to give the option of uploading copies of your sources and having them available to visitors. I've heard a lot of great things about it but not about uploading sources. The FamilySearch people are hard-wired to care for the ancestors forever, they consider it an honor and a duty. What safer place than a mountain?
So, anyone out there have any opinion on the best way to deal with such a task? I'd love to hear from you.
at June 10, 2008 No comments:

UPDATE: We have a Boil Water Advisory and evacuations in Seymour [CITY] are taking place now. (11:47 a.m.)

I have been watching all of the flood news in Indiana with interest. It's taking place less than 30 miles north of me. The operative word, of course, is NORTH. We have become a staging area at our little State Police Post for tracking and stopping. Tracking the water and stopping the traffic. I65 and US31 are closed here so they are routing traffic to Highway50. It runs right though town and east/west. 65 and 31 are north/south. There are a lot of lost people out there.
Columbus Hospital evacuated some to our hospital and I believe Floyd counties hospital. Being in the middle we get half our channels on TV[Comcast] from Indy and half from Louisville. The Indy half are out for some reason. I don't think it is from the water as they have been going out and popping back in for over a week. So I can't see much today about what is going on. Maybe they will pop in later today. I'd get better reception off an antenna right now.
We have the East Fork of the White River here, or just over there actually:o) I'm not in trouble but there are those here that were already in trouble. The river is OUT. It was OUT before the big rains came. This morning it was at 20.6 feet and rising. It will continue to rise. I haven't seen the estimates yet. Maybe I don't want to look. The biggest flood was in 1913. The highest it has ever gone is 21 feet. So you can see the problem. They are evacuating many rural towns here in Jackson County as I write this. It isn't going to crest until probably mid-week. We expect rain here Monday and Tuesday. I'm really a 'get up and do it yourself' kind of person but for the people that are in the path and have already lost so much a prayer would not go amiss. The farmers need a special prayer. The fields were already half gone. Some are looking at total losses. Farming is a tough and thankless job. Without them we would be in real trouble.
at June 08, 2008 No comments: 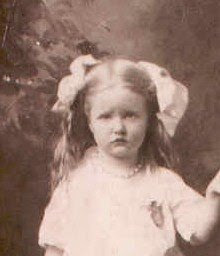 Della Mae Alexander Jaynes was my favorite grandmother. She died 12 years ago yesterday, and she is much missed everyday. She was born to William Hays Alexander and Olive Ellen Martin on September 4, 1904 in Jackson County, Indiana. The oldest of 7 children, and she was the longest lived of all of them. 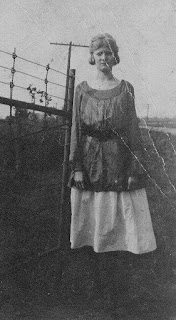 In the above photo she was 14 years old.
She married James Jaynes in 1920, and in 1928 her father died.
She and 'Jim' had 4 children. They managed to get through the Depression together, mourned the loss of their only son and build a business after that. He built a plumbing business out of their home and she was the one that took care of the phone. In the early days they were often paid with food or furniture. No one was ever turned away when they needed a plumber. They did fine all their lives and were very happy. They celebrated their 69th wedding anniversary 2 weeks before he died.
She loved birds, particularly canaries, and once she raised them, from egg to adult. The house was full of joyful noise. She was an avid gardener. Her thumb was so green she could grow anything. She loved to read and crochet. She admired Eleanor Roosevelt, and called Eleanor her hero. Her favorite poet was James Whitcomb Riley, and she often read "Little Orphan Annie" and "The Raggedy Man" to me, and just as they were written. She also sewed and taught me when I was barely big enough to have a needle. 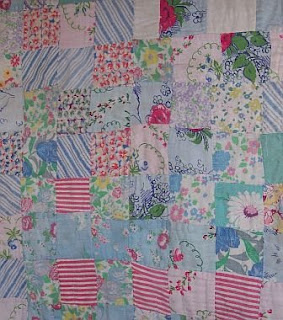 Above is a doll quilt she made me 50 years ago.
She loved her family, her church and life. She died quietly on June 6, 1996 in Jackson County, Indiana where she had spent her life.
at June 07, 2008 No comments: