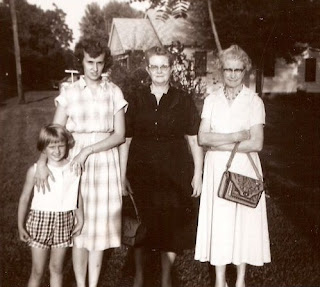 The first woman on the right is my great-grandmother, Olive Ellen Martin Alexander who was called 'Ollie' by her friends, Grandma-mom by my mother and I. Next to her my grandma, Della Alexander Jaynes, then my mother and the smallest woman in the group is me. The photo was taken in the late 1950's at my house. It's the only photo with all of us together that I know of. Grandma-mom died in 1972 and my grandma in 1996.

Well to start with my own name is a little strange. It's Sherida. My grandmother, Della Alexander Jaynes named me for a friend that had died young. I grew up never meeting anyone with my name, and it was guaranteed that the first day of school, every year of my schooling life, the teacher was going to say it wrong. Another eerie little tidbit is that I never saw my name listed anywhere except on a tombstone at the cemetery as a child. How spooky is that?

I do have an unusually named ancestor that has kept me wondering for a long time. My paternal grandmother was named Bizzie Lee Beard. In the1910 census she was listed as Lee B., 1920 census as Busylee and 1930 census, as a married adult, she was listed as Bessie. All documents with her name she is listed as Bizzie Lee. I have never found this name anywhere else. I just keep feeling that it had to be a nickname. By the way, it was always run together as though it was one name, Bizzilee.

This post is for the blog prompt carnival, "Fearless Females: 31 Blogging Prompts to Celebrate Women's History Month"
at March 03, 2010 No comments:

These are photos of Margaret Hovis Martin during her life. The first is at the ripe old age of 15, taken in 1875. The second is during her early years of marriage, somewhere in the time span of 1883 to 1887. Most likely the earlier date. The last image is of her late in her life. The photo was snapped at a Martin reunion in the late 1930's. She died in 1940 so this is possibly the last photo taken of her.

This post is for the blog prompt carnival, "Fearless Females: 31 Blogging Prompts to Celebrate Women's History Month"
at March 02, 2010 2 comments:

My favorite ancestor would be my grandmother, Della Mae Alexander Jaynes, but I know everything that is knowable about her. Next in line would be Margaret Hovis Martin, better known as Maggie. Everything I know about Maggie, I know from stories told to me by, yes, none other than her grand-daughter and my grandmother, Della Mae. Sounds so complicated doesn't it? It really is simple. My grandma loved, respected and missed her favorite grandma the same way I love, respect and am missing mine. From this point on I will refer to my grandma as Della.

Maggie was born in 1867 in Ohio. Her parents were; Henry W. Hovis and Elizabeth Ellen Bohall. Her father preached a little, played the fiddle and made baskets. Elizabeth Bohall is part of the Brown County, Indiana basket-making Bohall family. They are pretty well known in the basket collector community. I believe Henry learned his skills from his wife's family. I have often wondered if Maggie learned this skill herself. This, I do not know. At any rate, Henry and family lived in Brown County until about 1870. At that time they started showed up in Jackson County, just to the south east of Brown.

This is where she met and married Samuel S. Martin in 1883. Maggie was just 16 years old. Her first child was born a year later. She and Sam moved to Jennings County, Indiana and Sam farmed. They had 5 children; John A., Olive Ellen (my great-grandmother), Roxie Mae, Stanley, and Samuel S. jr.

Della loved Maggie's strength and determination. She often talked about Maggie wading into fights and dragging Sam out of the middle of it. She said her mother, Olive told her of a time when she saw Maggie stitch up a cut on the kitchen table that Sam had gotten in a fight. I heard many stories of this nature, but perhaps one is enough to put down on paper (well, ok, virtual paper:o). Anyway, in my child's mind, Maggie was like superwomen, saving the day, keeping the family together and keeping Sam in line and patched up. It seems she was warm and loving as well. I wanted to be Maggie!

Maggie died in Paris Crossing, Jennings County, Indiana on the 10th of February, 1940. I need to check history books that deal with baskets to see if she or her family is listed in any of them by name. I also need to get her marriage cert. I've found everything but the exact day of their marriage. These are simple things that I have just put off. This is the year to fill in the blanks on Maggie Martin!

This post is for the carnaval, "Fearless Females: 31 Blogging Prompts to Celebrate Women's History Month"
at March 01, 2010 1 comment: