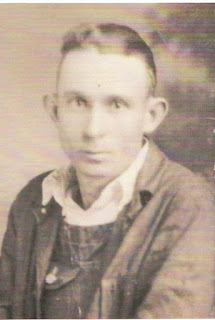 Rufus Marvin Brock was born on the 16th of December, 1909 in Collinsville, DeKalb County, Alabama, to Patrick Henry Brock and Adeline Jessie Morgan. He was the 2nd of 9 children.

I have not yet found the 1910 census for the family. Still have work to do one more contemporary families. This is never done!

In the 1920 census the family was in Van Buren Township, in DeKalb County, Alabama. Rufus is 10 years old and with his parents. His grandparents, Reece and Tilda Morgan live right next door. His father is farming.

On the 13th of November, 1929 he married Bizzie Lee Beard in Keener, Alabama. He and Bizzie would have 7 children, one dying in infancy. Two are still living.

In 1930, he is on the census with his father-in-law, Charles P. Beard. I addressed this census in the blog post Bizzie Lee Beard.

He was in the Navy in WWII, and saw action. It is a very sad story and I believe it changed him. He never spoke of it, and I did not know anything about his service until finding the records and looking into the ship he was on. It is a long story and I will deal with it in a separate post.

He hated farming, I do know that. So, when a new factory started in the county, he got a job there. It was Arvins. Rufus and Bizzie moved from Collinsville, Alabama to Seymour, Indiana in 1950 when Arvins opened a plant there and needed experienced people to work there. He came first, on July 29, 1950, and Bizzie followed on September 10, 1950. This he would do until his retirement.

On November 18, 1984, Rufus died. He was at home at the time. His cause of death was Lung Cancer. He was 74 years old. He was buried in Riverview Cemetery in Seymour, Indiana.

Rufus Marvin Brock was my grandfather. I can't say I knew him well. He was a quiet man.

Its like you read my mind! You appear to know a lot about this, like you
wrote the book in it or something. I think that you could do with some pics to drive the message home a bit,
but other than that, this is wonderful blog.
A great read. I'll definitely be back.